Sometimes I wonder if we live as if we are disconnected from the world, on it not in it. However, much we contemplate the impending doom of climate change (not enough) we carry on living as if our actions have no consequences – the travel industry is desperate to start again with flights all over the world, and people are desperate to travel again, for example. Yet whilst this might seem like an important moment to reconsider our actions, huge numbers of jobs and people’s lives are dependent on it restarting. Everything is entangled, whichever way you look at it. So, it is indeed ‘easier to imagine the end of the world than the end of capitalism’, as both Frederic Jameson and Slavoj Žižek are attributed as saying. But as Jameson continued, ‘We can now revise that and witness the attempt to imagine capitalism by way of imagining the end of the world.’

Despite the very literal threat we face, we find it collectively impossible to make the drastic changes that we need to. Yet we hail those that sacrifice on our behalf (Greta Thunberg sailing to New York, for example). Despite the wake-up call that the pandemic should act as, the chances are we will go ‘back to normal’ again once this is over. (Well, whatever normal means in the face of a decade of Covid recovery and ever-increasing poverty in this so-called developed and sophisticated country). We are so caught up in the system that we find it impossible to dismantle. The end is (un)imaginable, whichever way you look at it.

But I did not start this post to talk about climate crisis, nor capitalism. I did not intend to add to the cacophony of doom we face on a daily basis. Yet, even the idea that I might shield us from this, rather than face it here, is part of the problem, of course. It’s coming whether we face up to it or not. And face it we should.

I actually set about writing this because I was thinking about how we were shaped by our landscape, or perhaps, given our disconnection, how we were not. In the second version of Little English, I remember that we asked the actors to tell stories about how their bodies were shaped by their landscape. Or perhaps it was phrased differently; perhaps it was about the connection they felt between their bodies and their landscape. Either way, I remember one response by a particular actress who examined how her stomach was – to her mind – determined by her southern American upbringing, flabby below due to the junk food she ate and toned above due to a simultaneous obsession with exercise.

I wonder about how my body is shaped by my near-40 years in London. I grew up in a spacious house in the suburbs, not a flat at the top of a high-rise block. Perhaps this made me take up space in the city. Perhaps as I moved further into the city as I got older, it was the constriction that got to my body: years of cramming onto tubes and buses, sometimes having to walk slower than felt natural because of crowds, the smell and taste of pollution. I miss the sweat, the aroma of international food, the frenetic energy and spontaneity of life. London affected my body in the way I think through/with it. There are places inside me from all those years in the metropolis that are etched there, forever. And it is from here that thought initiates.

Yet, my 4.5 years in Cornwall have had their affect too. I think the space inside my body is far more expansive now that I live in Cornwall and the fields and the beaches and woods are my landscape. They live inside me as well as around me. I feel, sense, taste, smell and touch the landscape more and I am connected to the weather in a way that I never felt in London. The landscape is a massive contributor to my mood; a walk can lift me up, a drive down a country lane with fields either side will open my horizon, the sea – and particularly swimming in its vast expanse – makes me feel alive. I remind myself to listen to the sounds, to tune in.

It is wrong to say that I am connected to nature, because in this way we are separating nature from ourselves. I feel more part of an ecosystem. I have rooted myself.

I guess it is not surprising: if as Erin Manning and Brian Massumi wrote, ‘every practice is a mode of thought, already in the act’ then walking, swimming, dancing, living in this landscape, where the land meets the sea, is enacting new modes of thought. (Manning and Massumi 2014). The shapes of my thought are changing too. (But maybe that is age and maybe it is being immersed in doctoral research.)

When I moved here I remember thinking that I could never make any performance work again, because I’d left my stimulus behind. I remember thinking that I made work of the city. That it had harder edges, rougher pearls, and grittier urban undertones than the whimsical fantasies I saw here. I did not know how to make art here. The land was too expansive and I was too constricted. I was too serious, I think I might have thought. But there are serious problems here. Lots of them that need attention. It’s just whether we are prepared to dig within them, unearth them, examine them in the light. And when I say ‘we’ the question I really have to ask is: do I have the right to do so?

I don’t have an answer for this, and it is for another post. But one thing I do know is that the world has got inside me here. A different world; one not just of people and buildings and wanting more, but of land, earth, rivers, grass, sea, animals, technology and machines. I have been upended, (un)earthed, or rather dug in.

I am a beach with a city beneath.

I have discovered that I am part of something much bigger than us.

And that is something I can explore. 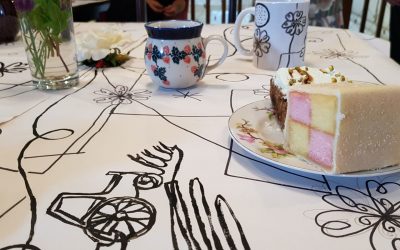 Hiding the technology and an experiment in co-creating remotely In February 2021, supported by... 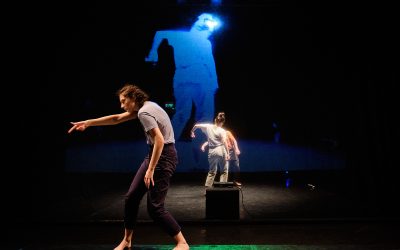 Tools that Propel – how to embody the knowledge of the practice within the thesis?

I’ve been experimenting with how to submit my practice as part of my thesis and made this video. It was a test to see how to get the particular knowledge embodied (and emergent) within the dancers who improvise with Tools that Propel.